In an ongoing series, we profile the plaintiffs challenging the draconian eviction moratoriums in Alameda County and the city of Oakland. Their stories are harrowing.

John is a landlord in Oakland and the rental income he realizes from his property barely covers his expenses. The downstairs occupant lived in the rental unit for roughly ten years and had a spotless payment history, always paying her $1,500 rent on time.

Until Alameda's eviction moratorium began, and the tenant hasn't paid rent since. A coincidence?

It doesn't appear that the tenant had a COVID-related hardship and in fact, she operated a moving and storage business during the pandemic called "Martina's Ride." It turns out she got a free ride herself by living rent-free with the landlord unable to do anything because of the draconian eviction moratorium.

To add insult to injury, the tenant refused to cooperate with the landlord's efforts to obtain unpaid rents through the rental relief program, leading to a rejection of the application on grounds of noncompliance.

As for the renter in the upper unit, they left in 2021, but it remained vacant because the landlord, already hemorrhaging money, was fearful that a new renter would move in and refuse to pay rent.

John bought some time through mortgage forbearance but will have to eventually pay. At his wit's end, he attempted to sell the property but what buyer would purchase a rental property with a non-paying tenant and no means to transition them out? The answer, of course, is no one.

John was so riddled with stress caused by his non-paying renter and the prospect of losing his property, he was hospitalized and to this day, remains disabled. His disability left him no choice but to quit his job and move into the upper unit - right above the non-paying renter - in order to save money.

To this day, John is unable to evict his renter as a direct result of the moratoriums and in contravention of state law. 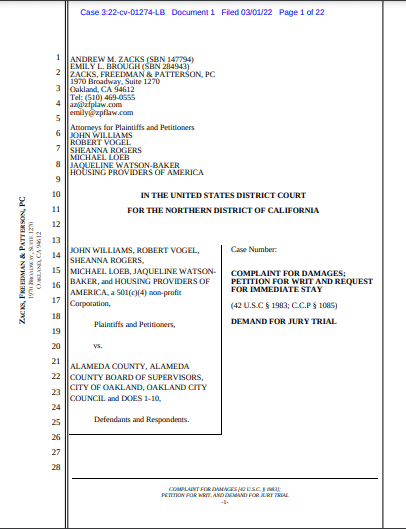